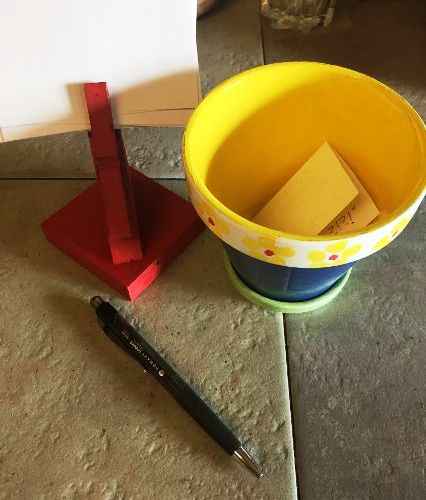 After seeing something like this several years ago (and thinking each January 1st that I’d do it but not following through… thoughts and ideas seem to stay in my head a long, looong, painfully long time before there’s any actual action), it’s finally in our house.

The idea is to paint a pretty jar, bottle, or catch-all, write down special memories that happen throughout the year, then read them New Year’s Eve.  Many of us reflect on struggles we’ve had during the current year as we welcome in the new one, and I thought this will be another way to honor the good. There’s always so much good… a great conversation with a friend reminding us we are loved, a car ride with a son who makes us laugh so hard our sides ache… and I don’t want to forget those moments.

So the first day of 2019, I sat at the table with a little clay pot, armed with ambition and positive thoughts, surrounded by paint bottles and brushes, then remembered I am NOT an artist! Not even a little bit. I spent the next few days brushing on uneven coats of paint, letting them dry, discovering they were indeed not dry as I left many thumbprints thinking “Lemme just check and see if it’s dry…nope, not yet,” and making plenty of goofs with paint dripping where it wasn’t supposed to go.

Realizing that it would be July before the paint job would be ‘perfect’ and that would be just another way to justify in-action, I decided the little pot was finished and on came the over-thinking phase. What should you call it? Why do you have to call it anything? But if you do call it something, come up with a good name. Merry Memories? Beauty Bucket? Cheery Chamber?

Finally I decided on Happy Pot- one because it made me smile, and two, because the name was safe since my son is no longer school-aged. I can only imagine being called in for a teacher’s conference if we’d started the ‘happy pot’ years ago:”We have some concerns. Austin says ‘Every time we come home from doing something fun, Mom goes straight to her happy pot. She loves her happy pot!'”

I had no intention of writing today; in fact my intention was NOT to write. There are many chores to be done around the house, and paperwork to catch up for my job. Sometimes, though, a Force greater than ourselves has Intentions of Its own and we are compelled to follow.

I threw books in the garbage today- into a big bag filled with dusty papers, used tissues, onion peels, coffee grinds, apple cores- and it was right where they belong. In the trash.

My love of reading started at an early age, thanks to my mother. She took me to the local library every week for story-time, and taught me to read before I even entered school. Curious George books were my favorite, with Clifford the Big Red Dog coming in as a close second. Just entering the library holding my mother’s hand caused what I now know to be an adrenaline rush in my five-year-old mind and body. I remember with fondness the old building, the creaky wood floor, the children’s section, and seeing the massive number of books from floor to ceiling. There was a ladder that moved around the room so the librarians could reach the books on the top shelves. How I longed for the day to be big enough to climb that ladder, knowing I would never be allowed to do so!

There are many books in my home; I designated this morning as the time to thoroughly clean the bookshelves. Since thorough cleaning doesn’t happen often enough in our house, I decided to take full advantage of this unusual burst of energy by taking down every single book to give it a good dusting. Whew, what a long overdue and much needed task! I found books I’d forgotten about, set aside the ones I haven’t read yet, and rediscovered some of my favorites. In the midst of those was a Bible belonging to my late father. It was such a comfort to open it to the last page Dad had book-marked. Leading a troubled life plagued by constant battles with depression, he came back near the end of his life to the faith he left decades before- I am so grateful for that.

Among the forgotten books on the shelf were copies of a novel my ex-boyfriend had written; those were the ones that didn’t bring forth nostalgic good feelings. A talented writer and artist, Ex could have been successful. He could have known the power of love and been enlightened by the goodness of our Father and inspired by that same good existing in our fellow man; instead he chose darkness and fear. What started out as a good premise for a successful novel about Adam and Eve became twisted and grotesque. Instead of teaching people by bringing them closer to God as he claimed he wanted to, he spent his days and nights watching and posting videos about end times. He would shout like a lunatic, declaring that we need to find a safe place to hide. He tried every scare tactic he could think of to get me to agree with him- calling me the Devil, threatening, cursing, shouting, waking me at 2am with his crazed ranting, blaring YouTube videos produced by fellow madmen as loudly as possible.  I was stupid and I let him. I was weak. Deep down, though, there was a shred of self-preservation lingering… I’ve not always been the best parent, but I don’t want my own child to live in constant fear. Our Father doesn’t intend that for His children either.

At last, the day came that Ex left- thank God.

The books that left my home today were his. Along with them went the reminders of hatred and fear. The Light is much better than the darkness. 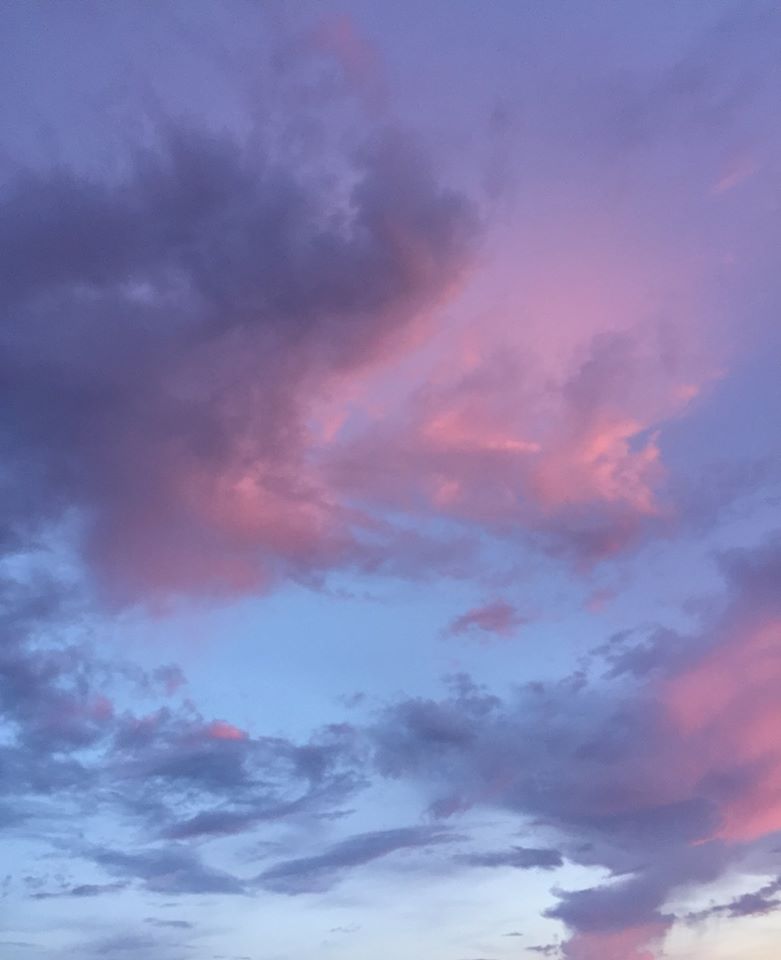 We don’t know when it will happen, where we will be, or who (if anyone) will be with us when it comes. What we can do is make good use of the breaths that we take now by uttering words of kindness, love, support, and encouragement instead of anger, disappointment, admonishment, and hurt. The last conversation that we have with someone may be the last and we don’t want to look back on it with regret.

Follow Middle-Aged Musings: a Collection of Writings on WordPress.com